In part 2 of the Blue Jasmine miniseries, we discuss the similarities with Tennessee Williams’ A Streetcar Named Desire, the character of Blanche Dubois, clearly is the blueprint for Jasmine. The many actresses who played Blanche or were inspired by her from the women in Pedro Almodovar’s movies to Gena Rowlands in A Woman Under the Influence to most recently Carey Mulligan in Wildlife.  Hosted by Murtada Elfadl with guest TV and Film Journalist Candice Frederick. 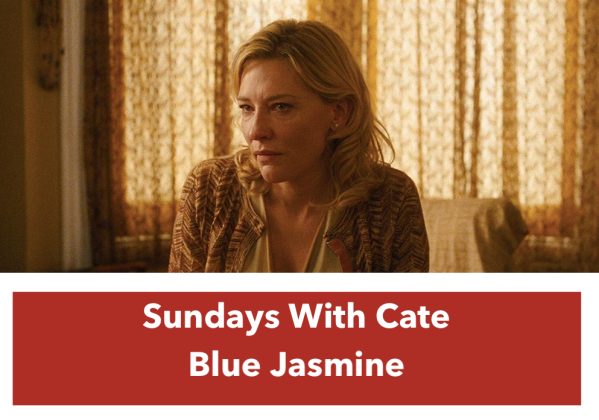 What is the film about?

From IMDB: A New York socialite, deeply troubled and in denial, arrives in San Francisco to impose upon her sister. She looks a million, but isn’t bringing money, peace, or love…

What year did it come out?

Who does Cate play?

Jasmine of course. One of her many titular characters.

How is Cate introduced?

Immediately and memorably. Jabbering away about her life and marriage to a stranger on a plane, sets the tone for how unstable the character is.

– No sexual tension between Jasmine / Chilli as there was btw Blanche / Stanley.

– Modernized Streetcar though themes of class disparity are consistent.

What reviews said of film / Cate:

“This is a film that draws deep from the well of A Streetcar Named Desire. Cate Blanchett, who has played Blanche du Bois onstage, is here cast as an updated version of Tennessee Williams’s anti-heroine, Blanche’s reveries about a faded Southern aristocracy replaced with contemporary delusions bred by life as lived among the 1 percent in Manhattan and the Hamptons. The film begins with Jasmine (née Jeanette) arriving in San Francisco, broke but still flying first class, the dazed victim of a financial scandal involving her former husband. Now homeless, she is forced to rely on the comfort of her estranged sister, Ginger, who is romantically involved with a blue-collar lug named Chili. (Although we see Chili in a wife-beater, he refrains from shouting, Hey, Ginnnnn-gerrrrrr!!!!) Like Streetcar, Blue Jasmine is the story of Jasmine’s further humbling, of upper-class pretension dashing against the rock of working-class earthiness; also like Streetcar, Allen’s work shares its heroine’s snobbery, the director as appalled as Jasmine by Chili’s and Ginger’s gaucheries, their lack of interest in high culture, their aspirational void” – Vanity Fair

Blanchett, Blanche — the names seem fated for each. Mr. Allen has said that he didn’t see Ms. Blanchett play Tennessee Williams’s most famous creation in Liv Ullmann’s celebrated 2009 production of “A Streetcar Named Desire” at the Brooklyn Academy of Music. (Jasmine’s appalled aside about being forced to move to Brooklyn after being priced out of Manhattan amusingly suggests why he didn’t.) Whatever his inspiration, he has been rummaging around in the classics for decades, so his appropriation of “Streetcar” doesn’t surprise. What does is his reimagining Blanche by way of another figure who changes depending on how you hold her up to the light, Ruth Madoff, the wife of Bernard L. Madoff, the investor turned avatar of a fallen world. It’s a masterly stroke that puts Jasmine’s dissembling into fresh, chilling perspective.

The allusions to “Streetcar” are copious and obvious, and spotting the quotations initially feels like a kind of humorous parlor game, from the French connection that links Blanche and Jasmine’s names to Mr. Allen’s staging of a violent skirmish, which echoes a similar one in Elia Kazan’s film adaptation. Underscoring the resemblances, Jasmine repeatedly explains that “Blue Moon” was playing when she met Hal, memories that evoke the blue piano that, as Williams wrote in “Streetcar,” expresses “the spirit of the life which goes on here.” In the play, Blanche also says that Stanley isn’t the type who goes for jasmine perfume, an aside that carries an accusation.” – Manohla Dargis, NYTimes

ScreenPrism on the similarities between Blue Jasmine and A Streetcar Named Desire.

Reviews of Cate as Blanche on Stage:

“What Ms. Blanchett brings to the character is life itself, a primal survival instinct that keeps her on her feet long after she has been buffeted by blows that would level a heavyweight boxer. Ms. Blanchett’s Blanche is always on the verge of falling apart, yet she keeps summoning the strength to wrestle with a world that insists on pushing her away. Blanche’s burden, in existential terms, becomes ours. And a most particular idiosyncratic creature acquires the universality that is the stuff of tragedy. All the baggage that any “Streetcar” usually travels with has been jettisoned. Ms. Ullmann and Ms. Blanchett have performed the play as if it had never been staged before, with the result that, as a friend of mine put it, “you feel like you’re hearing words you thought you knew pronounced correctly for the first time.” Blessed perhaps with an outsider’s distance on an American cultural monument, Ms. Ullmann and Ms. Blanchett have, first of all, restored Blanche to the center of “Streetcar.” – NYTimes