A sea expedition to find a killer shark. A riff on Jacques Cousteau. Cate Blanchett enters the quirky and unique world of Wes Anderson. Murtada welcomes producer and filmmaker Erica Mann to discuss The Life Aquatic with Steve Zissou (2004).

What is the film about?

From imdb: With a plan to exact revenge on a mythical shark that killed his partner, Oceanographer Steve Zissou (Bill Murray) rallies a crew that includes his estranged wife, a journalist, and a man who may or may not be his son.

What year did it come out?

Who does Cate play?

Jane Winslett-Richardson, a reporter from the Oceanographic Explorer, interviewing Zissou.

How is Cate introduced?

23 minutes in, appearing the mist before the Zissou guys and kinda taking their breath away. “Those are Vietcong man-of-wars.” 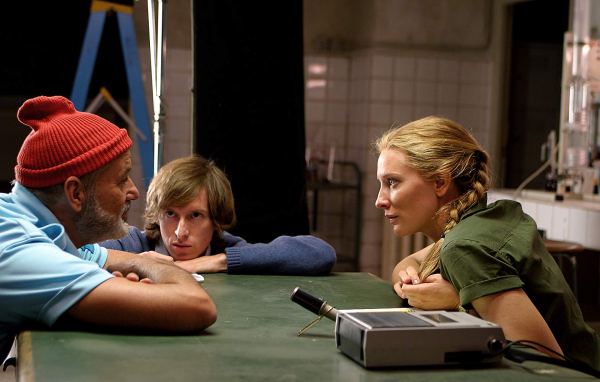 Too much quirkiness or what Stephanie Zacharek referred to as “waterlogged with whimsy.”

Film within context of Cate’s career:

Released the same year as The Aviator and perhaps that’s why it’s a forgotten blip in career.

What reviews said of film / Cate:

“Having established a rather hectic set of narrative premises Mr. Anderson proceeds to treat them casually, dropping in swatches of action and feeling when they suit his atmospheric purposes. He is less a storyteller than an observer and an arranger of odd human specimens. “The Life Aquatic” is best compared to a lavishly illustrated, haphazardly plotted picture book – albeit one with frequent profanity and an occasional glimpse of a woman’s breasts – the kind dreamy children don’t so much read start to finish as browse and linger over, finding fuel for their own reveries.” – Dana Stevens, The NYTimes 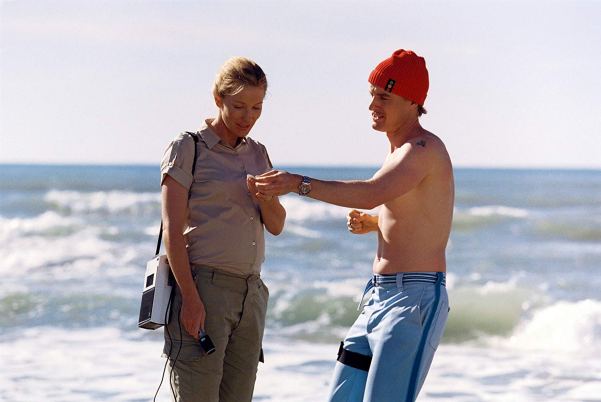 The film is often quite funny, but there are no bits and no punch lines. Laughing at any point makes about equal sense. The low-key comic style lets the audience notice the absurdity, while allowing the actors to play the emotions straight. Thus Murray and Wilson are able to achieve a father-son poignancy in their interaction, even though most of their scenes are intentionally and faintly ridiculous. Murray’s scenes with Cate Blanchett work similarly. She plays a virtual parody of a crusading journalist, a five-months-pregnant magazine writer interviewing Steve for a “cover story,” a prospect that fills him with hope and paranoia. Their conversations satirize the tortured dance of celebrities and reporters. Yet “The Life Aquatic” also takes us into the pain of a working woman, on her own, pregnant by a married lover.- Mick LaSalle, SF Chronicle.

Cate Blanchett proves she can do anything, even things she should not do.- Roger Ebert.

At the Berlin Film Festival.

The House with a Clock in its Walls

Carol Part One: The Love Story