We continue recaping and reviewing Hulu’s Mrs. America starring Cate Blanchett. This week we will tackle episodes 6 and 7 of the series about Jill Ruckelshaus played by Elizabeth Banks and Bella Abzug played by Margo Martindale. Also in this episode an interview with Bria Samoné Henderson who plays activist Margaret Sloan on the show. Hosted by Murtada Elfadl with guest Andy Stewart.

What is the show about?

Official Synopsis: “Mrs. America tells the story of the movement to ratify the Equal Rights Amendment (ERA), and the unexpected backlash led by a conservative woman named Phyllis Schlafly, aka “the sweetheart of the silent majority.” Through the eyes of the women of the era – both Schlafly and second wave feminists Gloria Steinem, Betty Friedan, Shirley Chisholm, Bella Abzug and Jill Ruckelshaus – the series explores how one of the toughest battlegrounds in the culture wars of the 70s helped give rise to the Moral Majority and forever shifted the political landscape.”

Who does Cate play? Phyllis Schlafly. 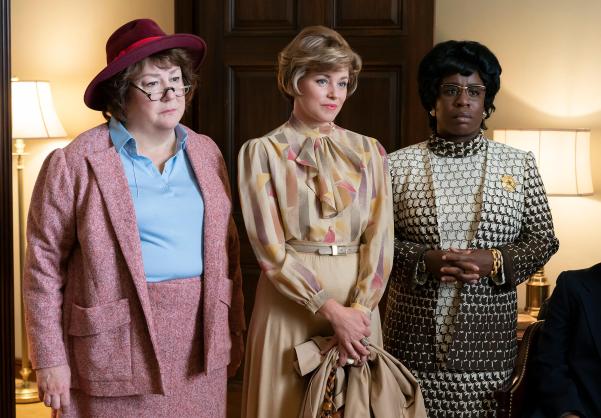 Official Synopsis: “With a pro-ERA Republican in the White House, Phyllis protests her own party, which puts her in conflict with Republican Feminist leader, Jill Ruckelshaus.” Written by Sharon Hoffman; Directed by Laure de Clermont Tonnere (The Mustang).

Official Synopsis: “Bella is put in charge of the first ever government-funded National Women’s Conference. Phyllis and her women clash over how to best disrupt the conference.” Written by Micah Schraft; Directed by Anna Boden & Ryan Fleck (Half Nelson, Captain Marvel).

Interview with Bria Samoné Henderson who plays activist and former Ms. Magazine editor Margaret Sloan. The interview starts at 39:45 if you’d like to jump ahead.

Previously on the podcast: